Islam, with over 1.3 billion followers world-wide, is one of 3 major world religions that profess belief in One God. The word “Islam” derives its meaning from the Arabic for “peace” and “submission”, describing the peace and harmony that comes with faith. A believer in Islam is called a Muslim, which in Arabic means “one who submits to the will of God”.

Many Muslims prefer to use the Arabic name for God, “Allah”. Although it doesn’t really matter whether you use the Arabic name of Allah, or the English name of God, as they mean nearly the same thing. Allah is derived from the Arabic words “al” (the) and “ilah” (god) which simply means “the God”. However, “Allah” is more precise, as the name “Allah” is only used for Almighty God. Whereas the English word God with a small “g” can be used in many ways, for instance gods, goddess, and demi-god. The Arabic word Allah is never used this way, it always refers only to Almighty God. Allah is the same God worshipped by Jews and Christians, called Elohim or Elah in Hebrew. Indeed Arabic speaking Jews and Christians also use Allah for the Almighty. There is only One God, the Creator of all that exists. Jesus said “the Lord is One”, and this is emphasised in the Holy Qur’an.

“Allah forgiveth not (the sin of) joining other gods with Him; but He forgiveth whom he pleaseth other sins than this: one who joins other gods with Allah, hath strayed far, far away (From the Truth).” Holy Qur’an 4:116

Also, this is same teaching encapsulated in the biblical Ten Commandments: 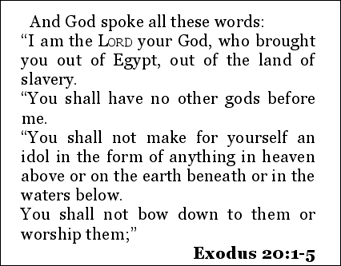 This strict belief in the Oneness of God, and the teaching that all Muslims are equal before God, enables Muslims to transcend the divisions of class, race, nationality, and slight differences in religious practice that plague most other communities. All Muslims belong to one community, the Ummah (People), irrespective of their ethnic or national background.

Within just two centuries after its rise in 7th century AD, Islam spread rapidly from its original home of Arabia to North Africa, from Egypt to Morocco and Spain in the West, while spreading to Persia, India, and China in the East. In the following centuries, Islam also spread to Turkey and the Balkans in the north, and sub-Saharan Africa in the south.

Many early Christians believed in the Oneness of God, they denied the Trinity and other false doctrines. One of the most famous groups who held this view were the Arians, named after a famous priest of their order called Arius. They were still quite widespread until 325 AD. That year, the Roman Emperor Constantine called the First Council of Nicaea. Constantine invited representatives from the different churches to decide on important issues of Christian doctrine, such as the Trinity. Arius was invited to this council together with his rival Athanasius. Arius’ belief can be summarised as follows:

Arius believed that God is The Creator. Therefore everything else that exists, is part of His creation, including Jesus. Therefore as Jesus is part of God’s creation, he cannot be God, and cannot literally be God’s Son. However the term “Son” was used as a way to show Jesus’ special status as the Christ. Athanasius thought differently, he started by pointing out the obvious, only God can save. God alone is able to break the bonds of sin, and all creatures need salvation. The logic of Athanasius’ argument goes something like this:

Or put another way, Athanasius thought:

Athanasius’ views were accepted by the Council, and have since become the beliefs of most Christians. The Council of Nicaea resulted in the first uniform Christian doctrine, called the Nicene Creed. Christians regard this as a momentous event in the history of the Church. However with the founding of the Nicene Creed, the doctrine of the Trinity became central to Christian belief, as did other doctrines. At this crucial point in history, Christianity became more or less the religion it is today, and diverged significantly from its Jewish origins. But, it is written in the Scriptures:

Interestingly only 245 years later in the year 570 AD, Prophet Muhammad was born in the city of Mecca. Muhammad taught the same belief in the Oneness of God as Arius. God says in the Holy Qur’an:

“…Say not “Trinity”: desist: it will be better for you: For Allah is One God: Glory be to Him: (Far Exalted is He) above having a son. To Him belong all things in the heavens and on earth. And enough is Allah as a Disposer of affairs.” Holy Qur’an 4:171

Prophets recorded in both the Holy Bible and Holy Qur’an 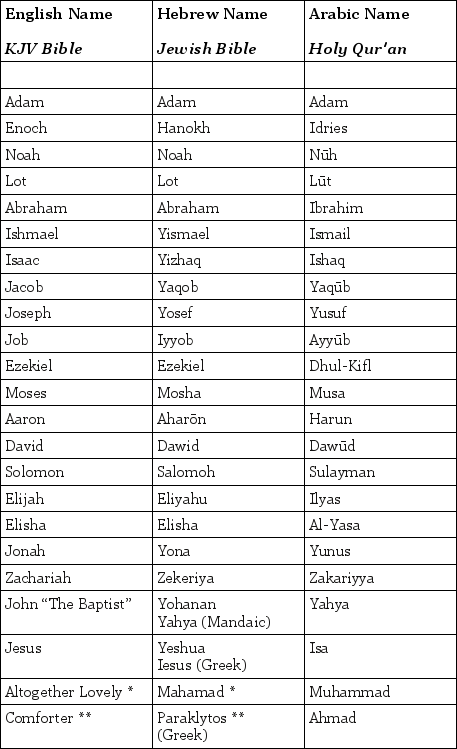 Muslims believe in, love and respect all of these Prophets. Their names in English changed more as they were derived from Hebrew and Aramaic via Latin and Greek. The Jewish prophets were Middle-Eastern men, hence their language would have been Hebrew or Aramaic. So their names would have been the ones listed above in the Hebrew Name column, not the more commonly known English names. Hebrew names are often similar to the ones used in the Holy Qur’an. Arabic, Hebrew and Aramaic are in the same family of Semitic languages. These prophets, as well as the nations of Israel, and Ishmael (Arabs) are all descended from Abraham. The Jews and Arabs are cousins. Muhammad was prophesied in the Song Of Solomon as Mahamad in Hebrew. Jesus foretold him in the Gospel, the intercessor or counsellor (paraklytos) who “will guide you into all truth”, which was referred back to in the Holy Qur’an 61:6 where Muhammad is called Ahmad.