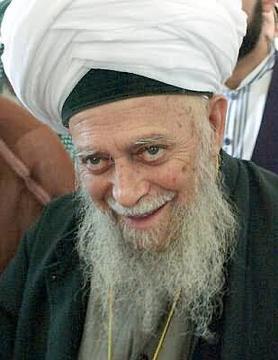 “We have four seasons in our lives. First, springtime comes, second, summertime; the third season, autumn; the fourth one, winter. So many people may go during springtime, at the beginning or in the middle or the end. Some people come to summertime, also; at the beginning, the middle, or the end of summer, they may go. Some people come to autumn; yes.

Mawlana Shaykh Nazim Adil al-Haqqani, a man never promoted by the media, a man not ordinarily famous, not a celebrity in the usual sense, a Muslim, scholar, pious man; a man who nevertheless touched the hearts of millions of people around the world. Mawlana, as he is affectionately known to many of his murids (students), will be sorely missed… At any given time, there are countless Awliya Allah (Friends of God) living in different countries around the world. Many known only to Allah, others known to their murids, a few touch everyone who has eyes to see the Spirit of Divine Love flowing through them; Mawlana Shaykh is of the latter kind.

Nearly a decade and half have elapsed since my heart was guided to make bayah to Naqshbandi murshid (spiritual teacher), Shaykh Sufi Mohammed Abdullah Khan of Ghamkol Sharif. The work and community of Mawlana Shaykh Nazim eased my spiritual journey, helping me discover the authentic spirit of Islam, removing the ideological hurdles to me discovering and making bayah to Shaykh Sufi Abdullah. Hence, Mawlana Shaykh Nazim occupies a special place in my heart, and the Naqshbandi-Haqqani community very much part of my life. One aspect of Shaykh Nazim that really demonstrates his greatness as a Human Being, is how much people like myself feel the loss at his passing, even though he wasn’t my personal murshid and unfortunately, I never had the opportunity to meet him in person…

“When you are respecting, then divine love runs through hearts and you should be a source of divine love, and everyone should also be a channel of divine love for each other.”
~ Mawlana Shaykh Nazim, Liberating the Soul: Volume 2.

While over the years, I’ve come into contact with many people who’ve been all too quick to criticise Shaykh Nazim, how many have possessed even 0.1% of the dedication to Allah SWT the Shaykh demonstrated throughout his life? To seeking out authentic teachers who possess wisdom and knowledge, then spending the rest of their lives disseminating what they have learned to people of all backgrounds, with no prejudice, internationally. Never asking for anything in return… Such people are incredibly rare, especially in an age dominated by materialism!

“Near the establishment of the Hour, there will be the days of much killing, and religious knowledge will vanish (i.e. through the death of scholars of religion), ignorance will spread.”
~ Prophet Muhammad, peace be upon him, (Bukhari and Muslim).

Mawlana Shaykh Nazim was a very loving man, utterly devoted to Allah SWT, and the well-being of our Human Family. When asked about his greatest wish, the noble Shaykh said:

“All we want is peace for the whole of mankind. Every year we look out for a general peace all over the world, one that will enter everyone’s home. Don’t think that peace will only be amongst nations. The smallest cell of the community is the family. Sadly throughout this century family problems are increasing and chaos is spreading in all homes. You cannot find any home where family members are living peacefully with each other. That is the biggest problem occupying people’s conscience, heart and mind. They want a solution.

I heard it is written that nations are spending 5 billion dollars every day on weapons. How can there be peace in this year, or in the next like that? We know that weapons are for killing and destroying. As long as nations are running after that, you will not find a general solution for peace.

Islam has surely lost one of it’s brightest luminaries of modern times. Our Human Family has been deprived of one of the greatest spiritual teachers in recent memory. We are all poorer for the passing of Mawlana Shaykh Nazim.

Let all of us remember the words of Mawlana Shaykh Nazim, and honour his work through doing whatever is within our power, through Divine Grace, to promote Mawlana’s teachings of Peace, Love, and “…holding fast, all together, by the rope of Allah, being not divided…” (Qur’an 3:103).

May Mawlana Shaykh Nazim rest in peace, and his blessed soul be granted wings to soar to the highest station in Heaven, through the Endless Mercy of Allah SWT. Inna Lillahi wa inna ilaihi raji’un. Surely, to Allah we belong and to Him shall we return. Amin.

“When you reach that station, when the veils are taken from your heart’s eyes, you will find yourself in the same universe that you were in before. We are still there, just as the sun is in the sky while it is on earth; we say, ‘The sun is here,’ while the sun is in the skies. It is just the same situation for your soul. Everyone’s soul is like a shining sun and it has a station in Heaven, in the Divine Presence, never leaving its worshipping, never leaving it’s glorifying its Lord, Allah Almighty.

Don’t suppose that our souls are sitting in silence, like this. All of them, in the Divine Presence, were glorifying and praising their Lord, Allah Almighty, and they are continuing the same thing. But we are here, and from that shining sun of our soul, only one ray comes and commands this body. If the whole of one soul’s power were to appear in this world, it would quickly melt, going away; it would not be able to bear it. Therefore, Allah Almighty only sends one ray representing your personality, which is in the Divine Presence, to come into this world.”

“Remember me well, O my friends! Each teacher reveals his ideas in his own special way, and then he disappears. Like my predecessors I have revealed the bird of my soul to those who are asleep. Perhaps the sleep which fills your life, has deprived you of this discourse; but having met it, your soul will be awakened by the secret which it reveals.”

~ Shaykh Farid al-Din Attar, The Conference of the Birds.