“In recent months I have spoken many times, about how difficult and dangerous a period, it is through which we now move. I would like to take this opportunity, to say a word about the American spirit, in this time of trial.

In the most critical periods of our nation’s history, there have always been those fringes of our society, who have sought to escape their own responsibility by finding a simple solution, an appealing slogan, or a convenient scapegoat.

Financial crises could be explained, by the presence of too many immigrants, or too few greenbacks. War could be attributed to munitions makers, or international bankers. Peace conferences failed because we were duped by the British, or tricked by the French, or deceived by the Russians. It was not the presence of Soviet troops in Eastern Europe that drove it to communism, it was the sellout at Yalta. It was not a civil war that removed China from the Free World, it was treason in high places.

At times these fanatics have achieved a temporary success, among those who lack the will or the wisdom to face unpleasant facts or unsolved problems. But in time the basic good sense and stability of the great American consensus has always prevailed.

Now we are face-to-face once again with a period of heightened peril. The risks are great, the burdens heavy, the problems incapable of swift or lasting solution. And under the strains and frustrations imposed by constant tension and harassment, the discordant voices of extremism are once again heard in the land. Men who are unwilling to face up to the danger from without are convinced that the real danger is from within.

They look suspiciously at their neighbors and their leaders. They call for a ‘man on horseback’ because they do not trust the people. They find treason in our churches, in our highest court, in our treatment of water. They equate the Democratic Party with the welfare state, the welfare state with socialism, socialism with communism. They object quite rightly to politics intruding on the military – but they are very anxious for the military to engage in their kind of politics.

But you and I – most Americans, soldiers and civilians – take a different view of our peril. We know it comes from without, not within. It must be met by quiet preparedness, not provocative speeches. And the steps taken this year to bolster our defenses – to increase our missile forces, to put more planes on alert, to provide more airlift and sealift and ready divisions, to make more certain than ever before that this nation has all the power that it will need to deter any attack of any kind – these steps constitute the most effective answer that can be made to those who would sow the seeds of doubt and hate.

So let us not heed these counsels of fear and suspicion. Let us concentrate more on keeping enemy bombers and missiles away from our shores, and concentrate less on keeping neighbors away from our shelters. Let us devote our energy to organizing the free and friendly nations of the world, with common trade and strategic goals, and devote less energy to organizing armed bands of civilian guerrillas that are more likely to supply local vigilantes than national vigilance.

Let our patriotism be reflected in the creation of confidence in one another, rather than in crusades of suspicion. Let us prove we think our country great by striving to make it greater. And, above all, let us remember, however serious the outlook, however harsh the task, the one great irreversible trend in the history of the world is on the side of liberty – and we, for all time to come, are on the same side.” 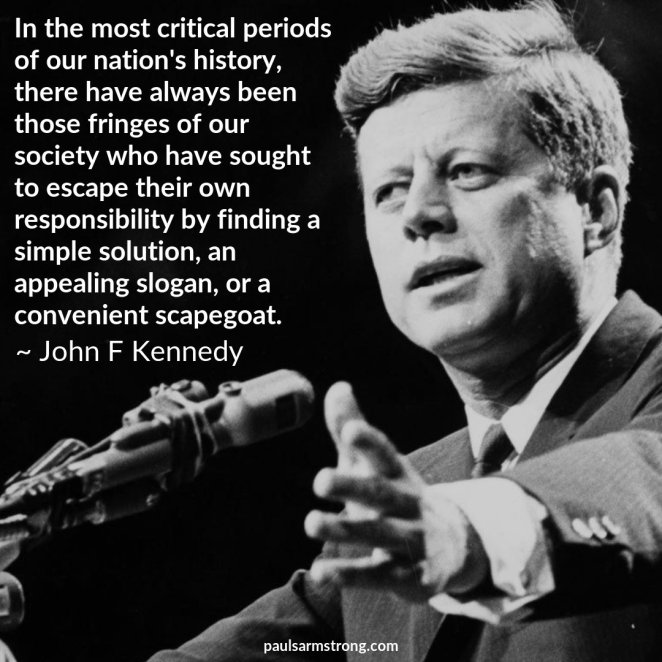