Simone Weil: The Personal and Impersonal God and the Sanctity of the Atheist 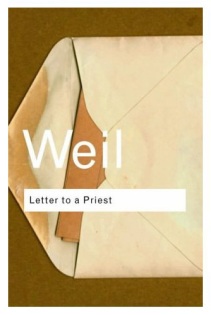 “As the Hindus say, God is at the same time personal and impersonal. He is impersonal in the sense that his infinitely mysterious manner of being a Person is infinitely different from the human manner. It is only possible to grasp this mystery by employing at the same time, like two pincers, these two contrary notions, incompatible here on earth, compatible only in God (the same applies to may other pairs of contraries, as the Pythagoreans had realised).

One is able to think of God at the same time, not successively, as being three in one (a thing which few Catholics manage to be able to do) only by thinking of Him at the same time as personal and impersonal. Otherwise one represents Him to oneself sometimes as a single divine Person, at other times as three Gods Many Christians confuse such an oscillation with true faith.

Saints of a very lofty spirituality, like St John of the Cross, has seized simultaneously and with an equal force both the personal and the impersonal aspects of God. Less developed souls concentrate their attention and their faith above all or exclusively upon one or the other of these two aspects. Thus little St Theresa of Lisieux only represented to herself a personal God.

As in the West the word God, taken in its usual meaning, signifies a Person, men whose attention, faith and love are almost exclusively concentrated on the impersonal aspect of God can actually believes themselves and declare themselves to be atheists, even though supernatural love inhabits their souls. Such men are surely saved.

They can be recognised by their attitude with regard to the things of this world. All those who possess in its pure state the love of their neighbour and the acceptance of the order of the world, including affliction – all those, even should they live and die to all appearances atheists, are surely saved.

Those who possess perfectly these two virtues, even should they live and die atheists, are saints.